The highest level of the ladder of charity is to provide an individual with the means to support himself, to become self-sufficient, so that never again will he or she need to rely on the generosity of others to maintain his independence.
Since February, we have worked with two single mothers who had lived in a homeless shelter, the Shared Housing Center (SHC), which houses up to 23 families at a time. SHC has a highly dedicated staff that only accepts clients who are motivated to work and obtain financial self-sufficiency, matching our Ladder Project criteria. These two mothers and their sweet, upbeat children, are highly focused on turning their lives around.
​ 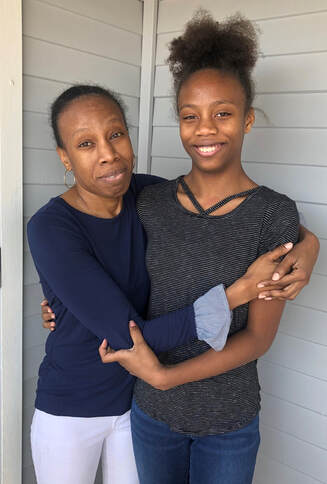 Petrina lost her job at the Dallas Housing Authority due to Covid. Since her daughter is doing all her school work remotely we are looking for remote work for Petrina.

Petrina moved here recently from Houston and after a short motel stay in Mesquite wound up in the shelter. Although Petrina earned a BA from Georgia State University and an MBA from the University of Phoenix, she has struggled  financially as a single mom. Her most stable period was working as a newspaper reporter in a Houston suburb, but when the paper was sold three years ago, she was laid off. She and her daughter wound up living with a friend, then she moved to Dallas hoping for a new start. Initially, they had no furniture and were sleeping on the floor until Congregation Shearith Israel members donated furniture and fulfilled an online Amazon registry equipping them with everything they needed.
David Corn, 60 - A Success Story!

On September 18, 2018 during Kol Nidre services, Shearith launched The Ladder Project, a pilot program that approaches the problem of chronic homelessness in a unique and holistic way. The Ladder Project empowers our 1,000 congregant families to lift one person at a time out of homelessness. As a congregation, we will take responsibility for this person financially and socially until he or she can accomplish self-sufficiency, however long that may take, so long as that person is making progress.

David was a resident of The Bridge, Dallas’ 24-hour, downtown homeless facility for 17 months, until he  moved  into his own studio apartment. As Congregation Shearith Israel began working with David, he continued receiving caseworker services from The Bridge.
​
Thanks to you – the members of Congregation Shearith Israel — we provided David with a strong safety net that enabled him to regain his self-esteem and confidence and reunite with his family.

Today, David is fully self-sufficient and works at Costco earning $15 an hour.